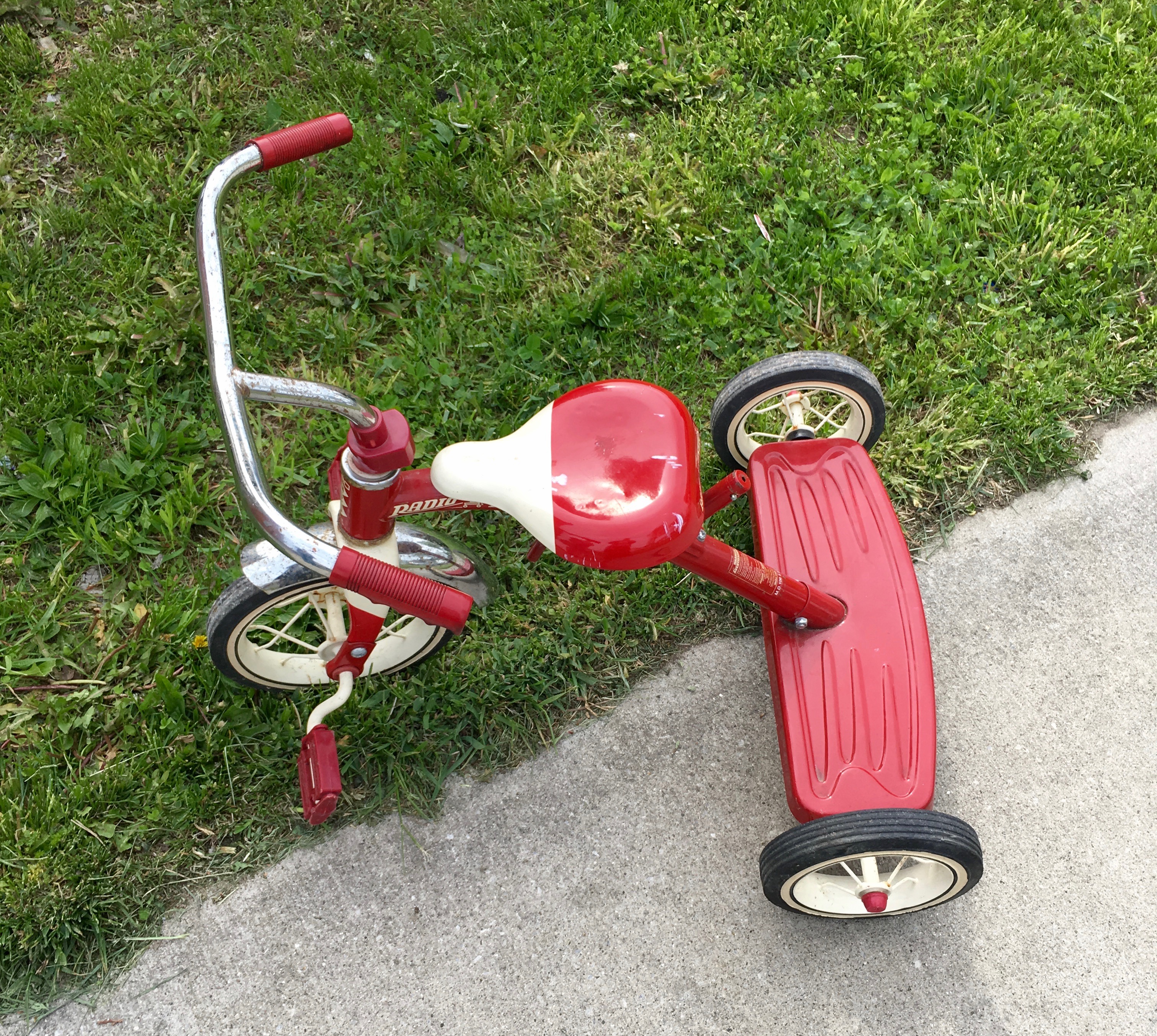 “Where are my tassels?” little sister Polly demanded. Little brother Tommy seemed to evade her question, jumping up from the red and white Radio Flyer seat and running to hide behind the galvanized laundry tub in the back of our yard. Mom kept the tub there and filled it with water every hot summer day. She called it our swimming pool and we never complained about it, feeling we were living in the lap of luxury.

Tommy was smart to hide behind the tub because Polly would never have jumped into the water to get to him. She’d be forced to race him round and round until he fell to the ground in exhaustion. Only then would she get her pudgy hands on him.

Polly, ignored, became enraged, her face spotting red flames, as red as the color of her tricycle. I sat back to watch the show. It was always a spectacle when Polly didn’t get her way. She was one who didn’t hesitate to throw a punch or to find another vicious way to exact revenge. No matter how small the infraction, Polly never forgave anybody for anything.

Dad used to say to mom, “That kid isn’t mine. She was born too fat, not like the other ones, and she is mean all the time.” Mom would shake her head and a look of disgust would replace her normal face. Dad had a point though, as Polly looked like mom and the rest of us took after dad. She was always so fat she’d never had to wear my hand-me-down clothes.

My clothes came from older sister Debbie and Tommy got his clothes from older brother Chico. Polly, Chico and Debbie always got brand new clothes. Polly would tell Tommy and I our parents loved them more because they got new things all the time. I would tell her to remember when she tried to wear my old coat and mom couldn’t get the buttons to close over her belly, big as the one on Santa Clause. Polly had boiled so hard it was like a cartoon and I’d almost seen steam coming out her ears!

“My bike bell is gone too!” Polly hollered, and I saw her face get a shade of red darker. I’d never seen that horrible face before and I genuinely feared for Tommy. Dad chose to intervene at that point, and I knew he was probably worried Tommy wouldn’t live through Polly’s carnage.

Under dad’s gentle questioning Tommy broke his silence and admitted the children on Albert Street had shoved him off the tricycle. They’d ripped away the tassels and forced Tommy to endure the sight as one of the boys used a screwdriver to remove the bike bell. He was literally shaking in his red rubber boots and I was overcome with pity for the poor kid.

Older sister Debbie came over to me along with older brother Chico. Debbie said to me, “It’s time to teach those bastards another lesson.” I knew exactly what she meant. We’d been to war with them before, the time they convinced Tommy to play Martian with them. They’d made him get naked and had painted the poor kid head to toe with green outdoor house paint.

Tommy had almost died mom told us. She and dad had taken Tommy to the hospital and the doctors had been frantic. Dad said the doctor told him, “If we don’t get all this paint off your boy, he will die either from suffocation or from lead poisoning.”

The doctors ordered the nurses to shave off all of Tommy’s hair and eyebrows, and even his eyelashes were cut off. The poor kid came home from the hospital the next week with skin raw and burned all over from the paint thinner the hospital had used to wash down his body. He was such a pitiful sight that mom and dad kept him hidden inside the house, so other children wouldn’t hurt him more. That boy didn’t have a face dry of tears for what seemed an eternity.

Those memories in mind, we rallied our troops and gathered the necessary weapons, sticks, bicycle chains and such. The Drouillard Road and Hickory Road gangs were going to war once again against the Albert Street kids. We could always count on the Hickory Road gang as they played with us in the garbage truck lane between the backs of our houses. They were our allies. We knew what the word allies meant because dad had fought in WW II and he’d tell us stories now and then.

The last war against the Albert Street kids had been a sweet victory as there had been so many cops who came to be the peacekeepers. We knew they couldn’t charge us little kids and we’d get our satisfaction along with many an apology, not just from the Albert Street kids but from their parents too. Those parents had sworn at the cops and we’d kids had been amazed the cops never put the cuffs on them. You sure could understand why their kids were so bad when you listened to those people harp on.

Debbi, Chico and I had gathered up the rest of the Drouillard gang and set up a meeting with the Hickory Road gang in only minutes! Debbie had called to Polly to join in this time since the damage had been done to her bike, but Polly turned on her heels and stuck her nose so high in the air I wouldn’t have been surprised if a bird had chosen to swoop down and perch on it.

Polly never joined in any of the wars as she would say she wasn’t going to let her clothes get ruined. It was a shame because she was so vicious and a mere taste of her violence would have sent the other side running and begging for eternal mercy. Instead Polly chose to save her hostilities for her siblings, and I’d thought that was such a waste. Polly was good at her game though, she could act innocent and sweet as apple pie when the children’s aid workers came a’calling!

During the winding down of this war, as the peacekeepers were interceding with pleas for peace, I’d climbed the stairs of an Albert Street house to fetch back Polly’s bicycle bell and tassels laying there in plain sight. I’d looked up to see a lady inside peer out her window in fear of me.

I’d chosen that moment to deliberately, though certainly not gracefully, tinkle on her porch. As I peed I smiled at her and invited her to kiss my ass. I’d learned a lot of bad words from the Albert Street kids and knew, as her eyes grew big as flying saucers, she recognized her own child’s voice as I’d mimicked him. That was one talent of mine, that I could parrot others so well.

A cop came then and took me by my free hand saying, “You need to get home and put on some dry clothes.” I’d smiled up at him and said, “That’s the house of the boy that stole these off my sister’s tricycle and he calls us Drouillard Road kids the welfare bums.” The cop had stooped down to look me in the eyes and said, “That isn’t very nice. I’m going to have a talk with his parents.” I smiled as big as I could and let the cop hold my hand as he walked me all the way home.

I was only six but with that big hand holding mine and making me feel so safe, I remember thinking, “This must be what having a boyfriend is like.”