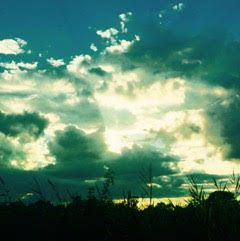 The clouds were swelling. She asked, “Tell me, did you ever see something like that?”

“See what? What are you looking at?” He asked. She turned to him and answered, “I’ve never seen green clouds!” “Naw, me neither.” He replied.

“Well maybe the sky will pick up a bunch of emeralds, and they’ll fall. We’ll gather them up and sell them to the jeweller.” Finishing her thought, she breathed in deeply then added, “I love the smell of rain.”

He looked away from examining a little critter he had pulled from the leaves of a cabbage plant. The suffering creature looked like a snail missing the shell.

“How would the sky pick up emeralds?” he asked. She smiled widely saying, “I saw it on television. The sky has dumped fish, real live fish, stones and other strange stuff.”

“You know you are nuts, but I like you. I like you a lot. But remember planes drop other colourful stuff.” He bellowed with laughter at his words raising his jacket over both of their heads just as the raindrops began to spatter. No emeralds fell from the sky, no fish, no stones, no nothin’ but rain.

He put his arm around her, protectively all the while thinking how she was so very like a snail without a protective exoskeleton. Pulling her close he started to sing a love song, one he had recalled while his heart had begun to feel as though it were physically swelling in his chest, and he asked, “Is this love?”

He questioned himself, dreading his words. A small wave of panic coursed through him. “Did I screw up? What if she thinks I only like her as a friend?”

Another thought pushed past his frantic thoughts, “What the hell am I thinking. I was her father’s hitman; why would she want to be more than a lover to me?”

“Why are you holding me so tight? Are you afraid of the rain?” She looked up at him, and he slowly eased his grip. He stopped ducking the inevitable and met her eyes.

Her expression of concern for him made that swelling feeling in his chest return. Instead of resting her head on his shoulder, she sat straight. Her eyes continued to scan the skies for the emerald rain she had envisioned.

The sky quickly darkened, and he saw the sky light up with a bolt of lightning. He started to count the seconds until he would hear thunder. His mother had taught him each second between the lightning and thunder meant how many miles away, the worst of the storm was.

An explosion of noise made the earth below him shake. “How weird,” he said to her, “On one spot of my thigh, I feel hot rain.” He looked at his thigh, and his chest tightened in horror. The warm liquid on his leg was blood that flowed from a gaping hole that obliterated most of her face.

He looked over at the hedges and saw her father standing there, the shotgun aimed at him. “Prick…” His final word, muted by the blast of the AR 15.